skip to main | skip to sidebar
TO SEE THE SLIDE SHOWS CLICK ON THE LINKS UNDER THE HEADERS IN THE LEFT SIDEBAR!

you might have to open it in a different tab/window.

Just like last August my photographer went up to the Wasatch Mountain Lodge to dance Argentine Tango, and then visited Freemont Indian State Park, Mystic Hot Springs, and Bryce.
But this year we added the Coral Pink Sand Dunes State Park on the way up, and Monument Valley on the way down! I stayed at Goulding's Campground, took a tour with Navajo Spirit Tours and had dinner and breakfast at "The View".
Enjoy the slide show by clicking on the red link in the left sidebar.
Posted by Dicky Duck at 7:01 PM No comments:

Some tangueras took me with them on a very special trip. We went up to the Wasatch Mountain Lodge to dance Argentine Tango, and then visited Freemont Indian State Park, Mystic Hot Springs, Bryce, Zion, and the Grand Canyon! Enjoy the slideshow by clicking on the link in the left sidebar.
Posted by Dicky Duck at 7:00 PM No comments:

A short weekend with a lot to experience! First day Sedona, hiking around and checking the vortexes. The next a visit to Arcosanti and Taliesin West. Have fun watching the pictures!
Posted by Dicky Duck at 8:00 PM No comments:

Another adventure every day! I started with the White Sands National Monument on Thursday, Friday I visited the Acoma Pueblo, followed by a nice hike in Kasha-Katuwe Tent Rocks National Monument on Saturday, a short - and very rainy - visit to Santa Fe on Sunday, and ended my trip with a short stroll through Old Town Albuquerque Monday morning. I hope you will enjoy the pictures!
Posted by Dicky Duck at 9:39 PM No comments:

i decided it was time for junior to go abroad for the first time and so he went to timmendorfer strand at the baltic sea in northern germany.
Posted by Dicky Duck at 7:18 PM No comments:

This time I shot the pictures! I accompanied my camera person to the ValenTango, and captured some impression from Portland, Oregon.
Posted by Dicky Duck at 9:43 PM No comments:

I sent off Junior, the traveling-duck-in-training to his first trip: a short weekend in Puerto Penasco (Rocky Point) Mexico.
And he did so well - I am sure he will do more trips! He even brought me a souvenir! Check out the slide-show (left sidebar) to find out what it was.
Posted by Dicky Duck at 6:59 PM No comments:

This is only a day-trip as I live close by - but I had never been in Tombstone, the "Town To Tough To Die", so was very excited about it! Enjoy.
Posted by Dicky Duck at 8:56 AM No comments:

I just was in Sicily for 6 days, staying in Vizzini and visiting Caltagirone, Taormina, Catania, and Ragusa-Ibla.
I am already dearly missing Cannoli, Granita, Arancini, the over 50 flavors of Gelati at the shop in Caltagirone, Italian coffee, Sicilian cheese, fresh tomatoes, and, and, and....
Click on the links under "Sicily 2010" in the left sidebar to go to the slide shows.
Posted by Dicky Duck at 12:49 PM No comments:

Last weekend I went to Havasupai with a group of Couchsurfers.
It was an absolutely gorgeous trip!
I hope you enjoy the pictures.
Posted by Dicky Duck at 10:56 PM 2 comments:

From Tucson I flew through Dallas / Miami to San Jose, Costa Rica and stayed the first night with some friends in Ciudad Colon.
The next day I took the public bus from San Jose to Santa Elena where I stayed at the Pension Santa Elena with the most wonderful staff you can imagine! They help you organize and book whatever tour you want to take and when you leave they tell you to call them if you have any questions or need any help anywhere in Costa Rica!
I visited a coffee farm and hiked the cloud forest and made my photographer do a canopy tour!
Then I went by jeep-boat-jeep to La Fortuna Arenal where I did not see the volcano as it was in clouds all the time but I got drenched by rain and had to warm up in the Hot Springs of Tabacon. I did find a wonderful little Austrian bakery in La Fortuna itself, Cafe Vienna, at the end of the street towards the volcano, "Kuchen frisch aus dem Ofen"!
Next stop was Tortuguero. On the way I visited a banana plantation and saw lots of wildlife. I stayed at the Evergreen Lodge and the next day took a boat trip through the canals of Tortuguero National Park.
Then I was off to the south Caribbean coast. I stayed at a beautiful house on the beach, managed by the most wonderful people of Banana Azul, most probably the best place down there! Their travel company, Gecko Trail Adventures (it shows up under Puerto Viejo Satellite), had organized most of my trip and done the most awesome job of it! I can just highly recommend them!
Puerto Viejo itself was a bit disappointing, a tourist dump, but the beach in front of my house was nice. And the rain forest in the Gandoca-Manzanillo National Wildflife Refuge was wonderful - but I got drenched again! The last two days it was just raining and raining....
And then it was back to San Jose and Tucson.
Posted by Dicky Duck at 10:24 AM 3 comments:

The pictures are up! In June I took a bustrip from Germany to Poland. I booked with Trube Touristik and the owner himself was my busdriver! And one of the best ones you can find, a master behind the wheel.
We were a group of 35 people and one duck and had lots of fun. First we went to Wroclav (Breslau in German) where we stayed for two nights at the Park Plaza, a very nice hotel right in the center of town.
On our way to Krakow we visited Jasna Gora, Poland´s most famous sanctuary which is visited by millions of pilgrims each year.
Then we stayed for two nights in Krakow, at the Hotel Justyna, a very nice family hotel.
On the way to our last stop in the Sudeten we visited first the historic salt mine in Wieliczka and then Auschwitz.
Our last two nights we spent at the Mercure Hotel in Jelenia Gora in Lower Silesia.
We visited the "Schneekoppe" (Sniezka Mountain), the highest mountain in the Giant Mountains (Karkonosze)which are part of the Sudeten Mountains, the Wang Church and drove through Jelenia Gora and the surrounding countryside and then back to Germany.
Posted by Dicky Duck at 12:07 AM 2 comments:

My Last Trip to the Big Apple

I was back in New York (one of my favorite places to travel to!) and brought back some exciting pictures for you!
I concentrated on showing you New York in such a way as if you would walk the streets with me.
There are three major walks:
Lower East Side - where I did not take many pictures because it saddens me to see a lively neighborhood being taken over by trust fund baby rentals and fancy restaurants - through the East Village, over to Washington Square to Soho and back to Broadway.
Times Square to Central Park.
Up Broadway from the Smithsonian National Museum of the American Indian to about Houston.
Then I attended two events:
Na Lei Hulu I Ka Wekiu, a wonderful hula show and
Parada Domenicana, the annual Dominican Parade in Manhattan.
Enjoy!
Posted by Dicky Duck at 7:18 AM 2 comments:

in july 2007 i visited the documenta 12 in Kassel, one of the world‘s most important exhibitions of modern and contemporary art which was founded by artist, teacher and curator arnold bode in 1955 and now takes place every five years.
this years show included 113 artists from all over the world and spanned a time line from 1573 to 2007.
check back for a my review, which i will post at a later time.
for now enjoy the pictures!
Posted by The Cat Realm at 10:37 PM 2 comments:

part of my family 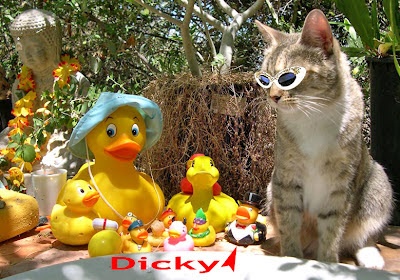 dicky duck, the traveling duck welcomes you all.
i live with my extended family in the backyard of The Cat Realm and like to travel once in a while.
you can see pictures from my last trip here.

check back once in a while to see if i was on another trip...

hint: something is coming up in july! i won't tell you where to, though!
Posted by The Cat Realm at 9:37 PM 1 comment:

My photographer at Monument Valley

The Town To Tough To Die

My Photographer in Sicily

My Photographer at Havasupai

My Photographer in Costa Rica

From the East Side to Soho

From Times Square to Central Park

The Sonoran Desert in Arizona, My Home

Watch some of my videos here